More about the Hayes family of Pretoria

We live in Pretoria, which was the administrative capital of South Africa, and is in Gauteng province. Gauteng is the smallest of South Africa's nine provinces, with an area of 17 000 square kilometers, but it has the biggest population - nearly 8 million. Pretoria was recently incorporated, along with 13 other local authorities, into the megacity of Tshwane. We've lived here since 1984, but still regard KwaZulu-Natal province as our real home, as we were all born there. If you want to know more about where we live, check our South Africa page. Our home is in Kilner Park, a suburb about 10 km (6 miles) east of the city centre. The suburb was named after John Kilner, who was secretary of the Methodist missionary society, and the whole area used to belong to the Methodist Church.

[Quick Index to all our pages]

We are Orthodox Christians and members of St Nicholas Orthodox Church in Brixton, Johannesburg, though on most Sundays Steve and Val go to Mamelodi nearby to a mission congregation that meets in a school classroom for the Hours and Readers service. There is more information about these on our church page.

We recently resumed our family history and genealogy research when we went on holiday to Cape Town, and spent some time in the archives, and met some cousins we had never met, or not seen for a long time. There is a copy of our family tree on our Gencircles page and there is also a list of some of the families we have been researching on our Tiny Tafels page, and a description of some of the families on our family history page. There's a description of how we got started on this on Steve's page.

There is also a shorter family tree showing over 2000 relatives and how they fit in. We've just included relations up to the second cousin level. We left out third cousins and those more distantly related. For fuller information, see our Gencircles pages. If you'd like to know more, just ask!
E-mail:

We're none of us players, just spectators, but Val and Bridget are the great football fans in the family, and we all support Manchester United and our own South African national team, Bafana Bafana. We had great fun going to watch the semi-final and final of the Africa Cup of Nations in 1996, and but most of the time we watch on TV. The team hasn't done too well since then. Val and Simon are the cricket fans in the family.

Steve has been calling BBSs since 1988, and started running one at work in 1991, and was running one at home from 1998. Unfortunately BBS software development got stuck, and the offline reader programs that made BBSs so useful were not Y2K compatible, so when the BBS computer died, I cancelled the extra [phone line subscription and closed it down.

Steve
Steve is now semi-retired. He used to work in the Editorial Department of the University of South Africa, but is now a freelance editor, writer and researcher. He is mission advisor to Metropolitan Seraphim, the Orthodox Archbishop of Johannesburg and Pretoria, and maintains several web pages on various topics, including African Independent Churches, Christian mission, literature and more. In July 2004 he was ordained deacon, and on Sundays alternates between mission congregations in Mamelodi and Tembisa. For up-to-date news, blogs etc, see his Yahoo 360 page here
Val
Val works at ADT Security in Cramerville, Sandton. She left Echo Prestress Concrete, in June 1998 after working there for 3 years. Travelling to Chloorkop, between Midrand and Kempton Park, was getting too expensive, but then after working close to home in Brooklyn, Pretoria, she was transferred to the ADT head office, and is back where she started. She runs the accounting system using Accpac. She is something of an expert in Accpac, and in a previous job was in Accpac support and consultancy, but the firm she was working for dropped Accpac and began supporting another system. She used to run the bookstall of the Society of St Nicholas of Japan, until we were asked to close it.
Bridget 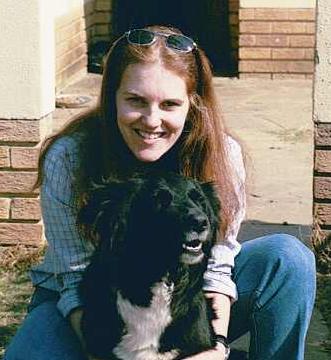 Bridget is 29, she graduated in theology at the University of Athens at the end of 2002, and is now an ikonographer. At the beginning of 2005 she returned to the University of Athens to do a masters degree in theology. You can see samples of her work Simon
Simon is 27 and graduated from Pretoria Technikon in fine arts in 2003. His art page has some samples of his art work. For money he works in a bookshop at Menlyn Centre.
Jethro
Jethro is 24 and after finishing high school at the end of 1999 trained as a vehicle mechanic with the Tshwane city council. He passed his trade test in 2003, and worked as a diesel mechanic with Freightliner trucks, but then was offered a job with Toyota at Brooklyn, where he is now working.

You are visitor number

You may also search these web pages for other topics that interest you:
This page hosted by

Get your own Free home page

Athens is a neighbourhood in Geocities - a fascinating concept of a virtual community. If you'd like to meet some of the other people in this neighbourhood, click here! You might even like to move in yourself.

While you're here, have a look at some of our other pages: